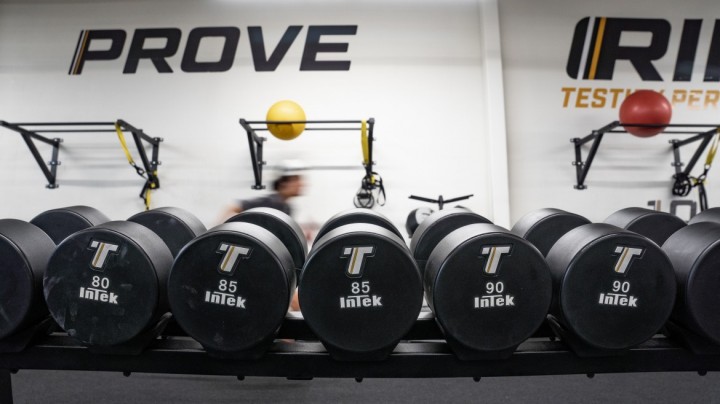 Matt Asmundson, the head performance coach at the RINK's Testify Performance, gets a tad bemused when asked about the popularity of the place. On a day when the gym at Testify South was almost filled to capacity with professional, WHL, U.S. College and Jr. A stars, and he, Luke Halstead, Conor Dowdell and Larissa Martyniuk were putting the players through their paces, he stopped, looked around and smiled. "I think it's popular for two reasons: results and culture," he said. "Our whole motto here is 'Prove Yourself,' and that's a two-way street that means the athletes have to prove themselves with their efforts and then we have to prove ourselves with results. *We do a good job of constantly tracking our testing metrics that we think have a good correlation to on-ice performance. We can show them that their efforts are being rewarded in the form of results and training progress.

That's what keeps them coming back."RINK Testify Performance has always looked at itself as a complete athlete resource. Whatever an athlete might need to get better, Testify has the resources to get the job done. That's why so many outstanding players keep returning every summer to prepare for the next season. "Any professional organization is going to have all the tools that we have," said Asmundson. "I think the fact that there is so much integration between what's going on out on the ice with the player development and goalie development staff, that the Testify staff have an understanding of their curriculum and what they're working on and how that's going to impact the players both physically and mentally and vice versa. The player development and goalie development staff have an understanding of how we're working with these players and training them over time. I think that results in a lot of trust and a really good working relationship between the on-ice staff, the off-ice staff and the players.

It's a triangle and creates an excellent performance picture. "Off-ice training is such a huge part of RHA. That's because there are so many young, developing athletes. Their bodies are still immature so as the guys grow up in the program, this is just normal for them. It's a part of their routine. They understand that it's what needs to be done. to get to the highest level and to help them achieve their goals. By making physical performance and athletic development such an important focus within RHA, it lends itself to a seamless transition for these guys when they enter Junior or pro." Sounds good, but there are plenty of places that have good coaches and lots of equipment. There is something else that is special about Testify. "Then there is the culture," said Asmundson. "I can't take any credit for that. The athletes take credit for that. Coming in, buying in and trusting us with their physical development, plus having fun while they work hard is a big part of what makes us so popular."

The 6-foot-4, 210-pound Daimon Gardner hails from Eagle Lake First Nation in Ontario. He moved to Winnipeg as a youngster and played in the Monarchs" organization before joining RHA in 2018. He was recently selected in the fourth round (12th overall) of the 2022 NHL Draft by the Vancouver Canucks."I went out to Vancouver for rookie camp and it was great," he said. "I played well and got some really good feedback from the coaches." This season, Gardner will play with the Tri-City Storm of the USHL and then next year, he has committed to NCAA D-1 Clarkson University. In order to be ready, he trains at Testify. "The RINK is a great place to train," he said. "The groups they have, provide really good competition and the coaches are great. I've been coming here since I was 12. My sisters (all NCAA D-1 players) worked out here and I've been coming here since they started. Loyalty is a big thing and it goes both ways. Most important, though, is what I'm doing here is working. That's why I stick with it." 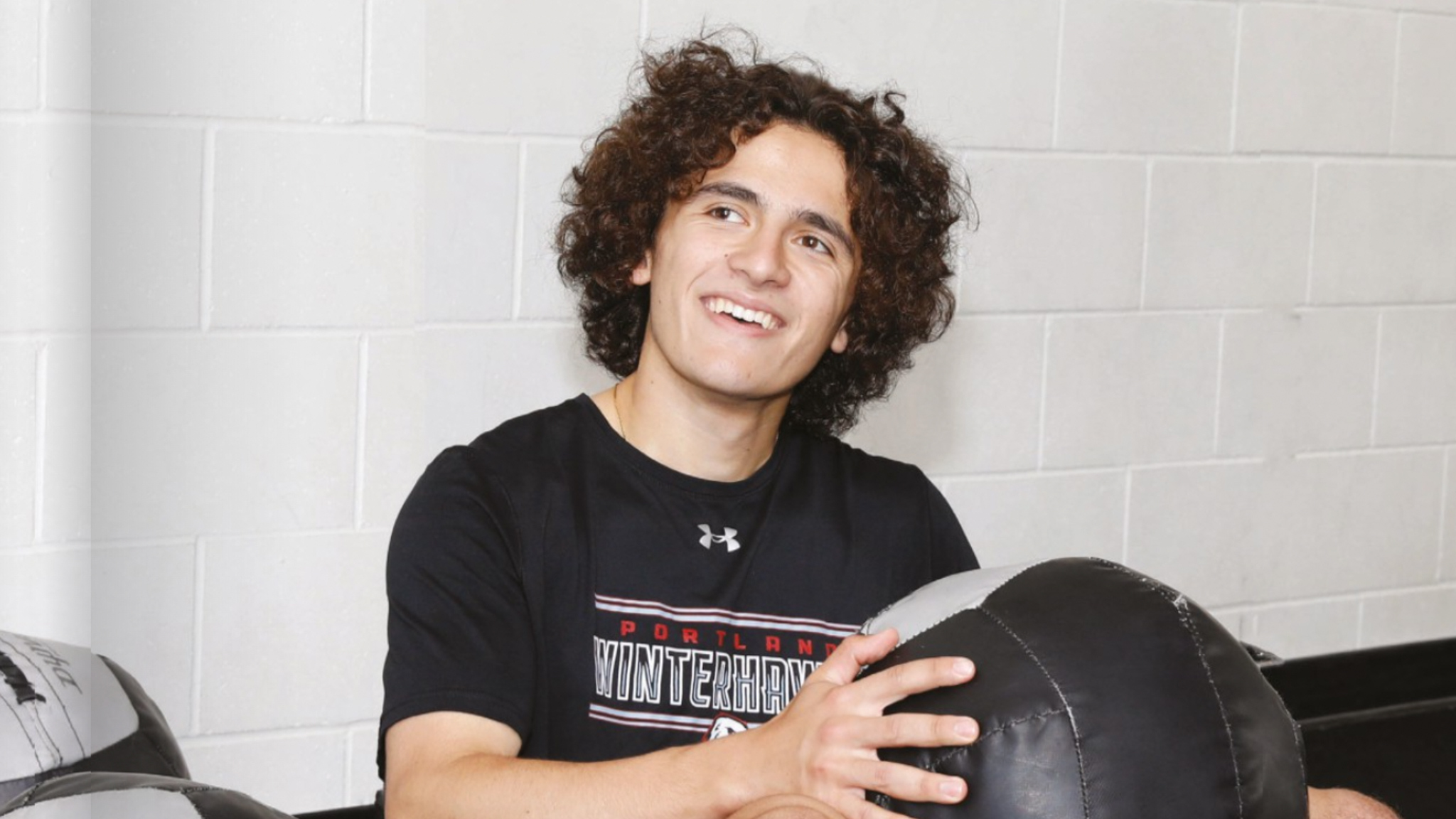 Goaltender Dante Giannuzzi is back in Portland for his all-important 20-year-old WHL season. Last year, in 35 games, he had a 19-9-0 record and was the go-to guy when the Winterhawks needed a win. "This is a really big year for me," said Giannuzzi, who played for RHA from 2016-2019. "I'm looking forward to that and I'm going to work hard enough to earn a pro contract this year." This summer, Giannuzzi says he's "just training every day," but he also has a job. He's a goalie instructor at the RINK, doing one-on-one sessions with younger netminders. He says he's even learned some things himself, working with younger goalies. He also spent a week in Vancouver and a week in Edmonton with different goalie instructors in order to get new insights into his game, but he still keeps returning to Testify. "Testify is unreal. I really love it. I love how technical they are and how good a job they do tracking my progression. Week by week, we do the same tests throughout the off-season. Using this equipment and getting real results is just so beneficial. I'm able to see just how much I've improved from week to week and that's amazing, "And when I compare where I was last summer with where I am this summer, it's fantastic. They also have a really great setup here, so that's why I keep coming back. The culture is awesome, too. These guys all help push me and that's a big part of it."

Ryan Hofer, 20, comes from a hockey family. His dad still plays, his brother, Joel, is a goaltender in the St. Louis Blues organization and his 10-year-old sister is also a goalie. A bit of a surprise selection, Hofer was taken in the sixth round (181st overall) of the recent NHL Draft by the Washington Capitals. He's a 6-foot-3, 180-pound centre who had 25 goals and 58 points in 67 games in Everett last season and is back with the Silvertips this year. He had a solid rookie camp with Washington and uses Testify Performance every summer to get ready to take his game to the next level. "Camp went really well," he said. "Everyone there was so professional and right from when I got there, I felt welcomed right away. Everything about it was great. I just feel like I developed a whole lot after spending a week with an NHL team. "I really worked hard to get drafted," he added. "Getting drafted is always something that's in the back of your mind but I didn't want to get my hopes up too much in case it didn't happen, but I worked really hard for it. There was some talk and I was hoping for it on Draft Day and it happened. I'm really grateful." He spent the summer training at the RINK, playing a little golf and working for his father's construction business. His time at Testify was a big part of his off-season preparation. "They always find ways to keep me coming back," he said. "They're great. Everyone is super friendly and yet they want you to work. They don't sugar-coat it here. They tell you what you need and they do a good job of finding your weaknesses and having you work on these aspects of your game that you could be better at. You really have to work, but they do a really good job here. And it's lots of fun. There is a lot of joking around with all these guys and there is a lot of hard work. It's really competitive and that's the atmosphere I need."

Tyler Parr, 17, who was the captain of the RHA U15 Prep team during the 2019- 20 season, is back with the Saskatoon Blades for his second season in the Western Hockey League. He had three goals and 11 points in 58 games during his rookie season in 2021-22 and expects a lot out of himself this year. "The first year in Saskatoon was super good," Parr said enthusiastically. "There was a lot of growth in myself from start to finish. I went out there, moving away from home for the first time and it was tough, but it was a great year." So why does he choose to spend his summer back in Winnipeg working out at Testify? "I just love it here. I come and work out here and I leave thinking I'm a better hockey player. When you feel like that, it makes you come back and work harder. It's a great environment here. You come into the gym ready to work. I'm an alumnus, I've been here for three or four years now. This is like home for me."