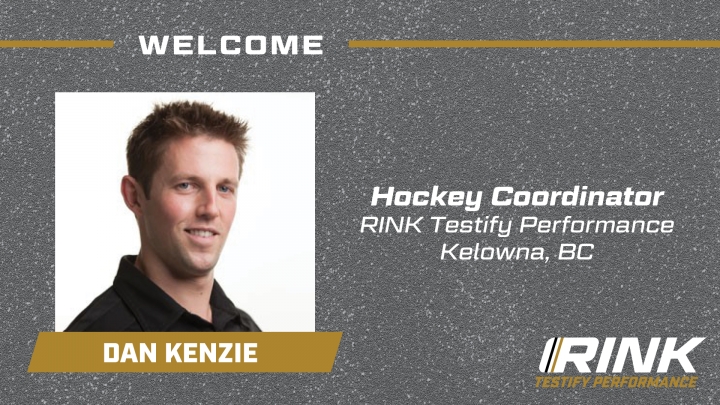 RINK Testify Performance is excited to welcome Dan Kenzie to the team as, Hockey Coordinator. Dan will be working alongside Regional Manager of Player Development, Glenn Carnegie to execute strategies to develop elite level athletes in the Okanagan.

“I am excited to bring my experience to the RINK team, we will work hard at using best practices to facilitate the continued growth of the program in the Okanagan” says Kenzie. Dan has a wealth of experience and knowledge working with elite level athletes. Dan graduated from the University of Calgary in 2009 with his bachelor in Kinesiology. He returned to his hometown in Kelowna to train out of Pinnacle Elite Athlete. Dan was formerly Head Strength Coach at Okanagan Hockey Academy and has worked with a variety of sporting athletes around the Okanagan. Along with, has consulted for Pacific Sport's Ignite and Athlete Academy Programs, UBCO varsity teams, Former Pursuit of Excellence Hockey Academy, Okanagan Sun Football, and more.

“I was fortunate enough to work with a tremendous group at Fortius when I was at BWC. Dan was one of the leads there and was incredible to work with. I loved his attention to detail, his focus on functional movement, and his work ethic. He was incredible there and will be even better at RHA. Working with Jeff Leiter and Glenn Carnegie I know our players and athletes will be trained by professionals who care about them as individuals and want nothing better than to see them succeed and grow each day. Dan is a superb hire.” said Executive Director of RINK Kelowna, Maco Balkovec.

We are looking forward to welcoming Dan to our team of professionals!

The RINK Hockey Academy Kelowna, formerly the POE Hockey Academy, is a world-class hockey experience focused on developing 360-degree Student Athletes through unrivaled training, coaching, programs, and resources. The RINK Hockey Academy is designed to build skills for hockey and values for life. RHA Kelowna is a proud member of the Canadian Sport School Hockey League (CSSHL). RHA Kelowna currently has teams in the U15, U15 Prep, U16 Prep, U17 Prep, U18 Prep, and U18 Prep Female divisions.

ABOUT THE RINK HOCKEY CORP.

The RINK Hockey Corp. is a Winnipeg, Manitoba, Canada based company founded in 2009 by Brad Rice, Tina Jones, and Mike Keane. The idea was to bring a unique approach to skill development and the game of hockey. Our team of professionals are committed to setting the standard of excellence and innovation in hockey in an environment where exceptional performance has no limit with the vision of being a complete hockey resource for personal and professional development. The company owns and operates the RINK Training Centre in Winnipeg, MB and its respective Player and Goalie Development divisions, as well as the RINK Testify Performance whose focus is sports-science and data-driven training. The RINK Hockey Corp. also owns and operates the RINK Hockey Academy, with locations in both Winnipeg, MB and Kelowna, BC, which delivers student athletes a world-class education-based hockey experience. The RINK Hockey Corp. prides itself on delivering development to all ages and skill levels while upholding a culture that fosters love for the game of hockey.