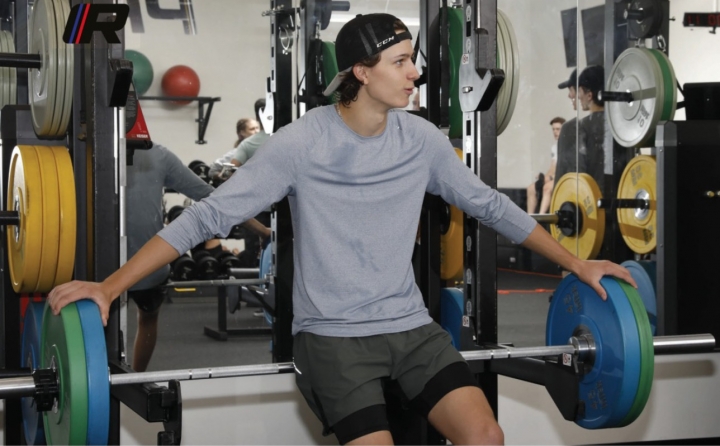 Josh Filmon is a very good hockey player. This past season, the 18-year-old from Winnipeg had 23 goals and 45 points in 67 games in his first full season with the Western Hockey League's Swift Current Broncos. He also played for Canada's national U18 team at the IIHF World U18 Championship and was selected in the sixth round (166th overall) by the New Jersey Devils in the recent NHL Entry Draft. Still, regardless of his success, there are other levels of the game to conquer and the only way he'll get that done is if he continues to get better and learn about both himself and the game.

In fact, when he attended New Jersey's rookie camp this past summer, he even learned a lot about himself there. "Yeah, there has been lots of learning this past year," he said. "As a person, it was my first year living away from home and as a hockey player with all these opportunities, I've had to get better."This year, the former RINK Hockey Academy U15 and U18 star will play his second full season in Swift Current. As he learned at New Jersey Devils' rookie camp last summer, one of the most important aspects of his ongoing improvement is to get bigger. He's 6-foot-3. but a skinny 159 pounds. "The biggest thing for me is to get stronger," he said. "To do that, I have to put in time at the gym. Eating right is a big component of that. I also need to get adjusted to playing against bigger, stronger guys, win battles in the corners and use my edge work properly to make up for my physical immaturity."

Playing for Team Canada this spring was obviously one of the highlights of his young career. But he'll admit he learned a lot about himself there as well. "It was a cool experience," he said. "It was obviously cool to see Europe for the first time. It's every kid's dream to play for his country. The outcome was a little disappointing, but you have to look yourself in the mirror and blame yourself for that. It was exciting to play against some really good competition and looking back on it, it was a very cool experience and I hope someday I get a chance to redeem myself when it comes to the outcome."

Filmon's jump from the RINK to the Broncos to U18 Team Canada didn't surprise his former coach at RHA, Rob Smith. "Filly is a very smart kid," said Smith. "One thing that I'm seeing more frequently now is that attitude is a major role in the success players have. More specifically - enjoying the ride. Being where your feet are. Not getting too caught up in the obstacles and barriers that come your way. Filly came to the RINK and we couldn't get him off the ice. He had so much fun working hard, practicing, competing in almost everything he did. His attitude and mindset toward his own development created a healthy, but very competitive environment here, which is something we encourage."

"(Testify Performance) is an awesome facility and I have no doubt in my mind that this place makes me a better hockey player."

Filmon is the grandson of former Manitoba premier Gary Filmon and our current lieutenant governor, Janice Filmon. He started playing the game, like many Winnipeg kids, in the three-on-three battles at Winnipeg Winter Club. "My dad (former U of M basketball star Gregg Filmon) and my older brother were very inspiring and they're both great coaches," he said. "My dad was a basketball player and while it's hard to believe, he knows a lot about the game of hockey." Josh started playing hockey for the Windsor Warriors and then the Glenwood Bruins out of St. Vital, and then played Triple A Bantam for the Monarchs. He ended up with RHA for two and a half seasons and then moved up to the Broncos.

This past summer, he spent another off-season in the gym at Testify Performance. "Matt (Asmundson) keeps earning my trust every year," Filmon said. "I've been with Matt the last four years, so he knows me the best and he knows how to make me get better. Look at his resume and just look at this place: All the pros that are here, guys that Matt is moving up to the next level. This is an awesome facility and I have no doubt in my mind that this place makes me a better hockey player."