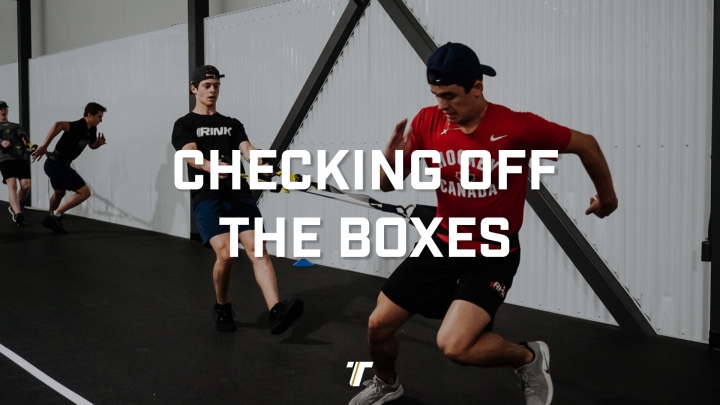 Jarvis Will Testify: Seth Jarvis checking off boxes this Off-Season

The Carolina Hurricanes gave their rookie sensation Seth Jarvis a list of homework items this off-season.

Not surprisingly, he has chosen Matt Asmundson and the staff at Testify Performance to help him complete his assignments.

Jarvis, the 20-year-old Winnipegger who was still a teenager when he cracked the Hurricanes' lineup last fall, finished his tremendous rookie season with 17 goals and 40 points in 68 games. Gifted with speed and a great touch around the net, Jarvis surprised a lot of so-called experts when he made the 'Canes. By midseason, those same experts were no longer surprised.

However, by his own admission, he still isn't the complete NHL player that he and the Hurricanes' brass want him to be and, as a result, he's been given some areas in which improvement is required.

"The first thing was to get stronger," he said, with a laugh. “That seems to be the assignment every year. But also, to be more powerful in my first three steps on the ice. I also have to work on playing better with my head up and just be ready in September to play an NHL game."

This summer, you'll be able to find the rising NHL star who spent two full school years as a member of the RHA U15 and U18 Prep teams, back home in Winnipeg working out daily - on the ice at the RINK and in the gym at Testify Performance.

After all, he wants to be prepared for a season that many believe will be a big one for the 'Canes.

"I think everyone involved here at Testify, the other players, the guys you work out with, our trainers, everyone just makes it so enjoyable," he said. “I've been working with Matty (Asmundson) for three or four years now and the level of comfort I have with him is great. Just being able to be myself and have fun with it. I mean, this gym has the very best equipment you can have in a gym, and the resources you have here are unmatched, but it's the people who make it fun."

One of Jarvis's biggest fans is his trainer. "He's a hard worker, really intense," said Asmundson. "The harder things get, the better he is."

Things got really hard back in late June when, in Game 7 of the Eastern conference semi-final, Jarvis took a huge hit from the New York Rangers' chief head-hunter Jacob Trouba. The hit left Jarvis with a head injury and he didn't return. It was his last appearance of the season.

"It was a tonne of fun," Jarvis said, with a wide smile. "That was my favourite season that I've ever had. It's one I will remember forever.

"Being a rookie in the National Hockey League is a lot harder than people give it credit for," Jarvis said. “I think especially if you come in at a young age. There is a lot of pressure, there is a lot of walking on eggshells at the start as you try to feel the room and feel how the guys are going to react to you being there. I think once you get comfortable, it's one of the funnest experiences you could ever have in your life. Once you get comfortable with everyone and they all take you in, it becomes a blast. You're like a little brother to everybody. You get bullied around,
but it's all in good fun."

Perhaps the best aspect of his rookie season was getting to play in front of the wild and crazy fans in the Raleigh-Durham region of North Carolina.

"Portland was a big step from playing U18 hockey but this was a whole different atmosphere and I don't think you can replicate playing in Carolina," he said. “There are 20,000 people there who just want to scream and yell and they want to get us going. It's a whole different animal from any place I've experienced.

When you go to different NHL rinks, you can really tell the difference from those buildings and our building. Coming back to Carolina is amazing and it shows how much fun the fans bring to the game of hockey.

"I started the first two or three months of the season in a hotel and that wasn't fun," he said. “Then (Sebastien) Aho let me live with him for about a month and a half and then in January I moved into my own apartment until the end of the year."

Injuries, apartments, hard work in the gym and off-season assignments aside, there is nothing better than playing in the National Hockey League.
“I mean you're travelling around the country playing a game for a living at 19 years old," he said, smiling. "You can't ask for much more than that."